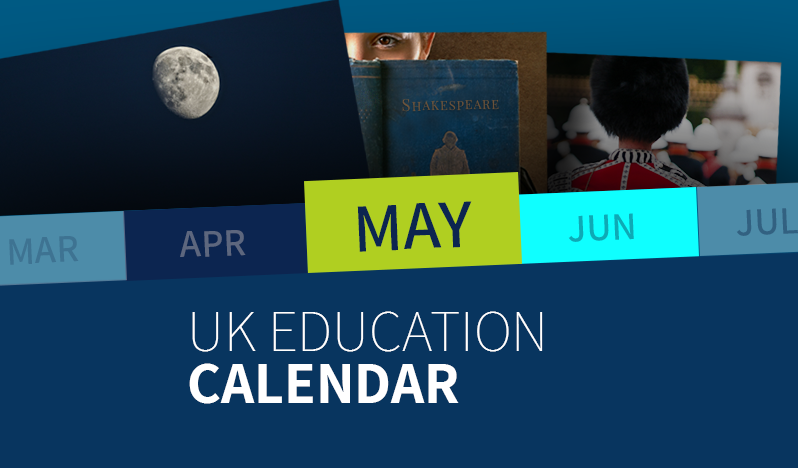 What’s on the Educational Calendar in May?

3 years ago
Laura
Plan Ahead

There’ll be a lot of last minute studying and exam sitting underway with the ISEB Pre-tests, 11+ and 13+ Entrance Exam Days all being held this month for prospective 2020 pupils. And if your child is starting school this September, you might want to familiarise them with British culture before they leave with suitcase in hand. Contact us to find out about some of the fabulous UK summer courses on offer this year.

If your child already attends a UK school you’ll know that half term falls in the last week in May in most UK independent schools. Why not organise a trip in the UK for your family that is both engaging and educational? We have sourced some go-to events for future historians, authors, artists, scientists, mathematicians and sports stars.

For future historians, authors and artists:

– Attend an event steeped in history with the Changing of the Guard at Buckingham Palace or Windsor Castle.

– Get lost in The Maze or recreate Henry V111’s incredible astronomical clock at Hampton Court.

– Feature in your own mini-documentary at the Imperial War Museum North, Manchester. Choose a story from spies to bomb shelters and from refugees to ration books.

– Appreciate Shakespeare’s contribution to English Literature at the Globe in London. Henry IV is playing or you could opt for a guided Tour.

– Mark two global anniversaries of the moon landing in 1969 and the 1989 fall of the Berlin Wall at the Salisbury International Arts Festival, with a mix of music, spoken word, film, dance, circus, theatre, comedy and family events.

For future scientists or mathematicians:

– Get inspired by more events celebrating the first moon landing from a scientific angle. There are events at both the Science Museum in London and Ely Cathedral in Cambridgshire.

– Have some serious fun at Gresham College in London at “The Toothpaste, Custard and Chocolate Mathematics Gets Messy” talk which looks at mathematical modelling of real, complex fluids in flow situations.

– Enjoy a game of cricket with England playing South Africa at The Oval or the West Indies playing Pakistan at Trent Bridge in Nottingham at the ICC Cricket World Cup.

– Watch strong men in action or even participate at the Highland Games. Traditional events include tossing the caber, putting the shot and throwing the hammer.